A Miracle in the Midst of Mountains

Home » Feature Stories » A Miracle in the Midst of Mountains 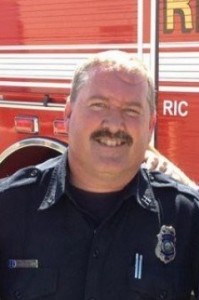 Brian Brown, a 2010 graduate of CSU, earned his Bachelor’s degree in Fire Science and has recently retired as deputy fire chief of the Wilton Fire Protection District in Wilton, California. You can find his book, “Rescued: One Family’s Miraculous Story of Survival,” on Amazon.com.

It was Memorial Day weekend near Sacramento, California in 2012. Brian Brown, a deputy fire chief for the Wilton Fire Protection District, and his wife, Jayann, were preparing Brian’s 1966 Cessna 172 for a flight to see their eldest daughter in Idaho. Brian had been flying since he was a teenager,  and now with two grown daughters, he was certainly comfortable in the cockpit. His youngest daughter, Heather, hated to fly and Brian hadn’t counted on her joining in on this trip. At the last minute, she grabbed a blanket and her duffle bag and hopped aboard.

The trio began to realize they were hitting some unfavorable weather and landed on a gravel runway in Oregon, near the Owyhee Mountains, about two hours into their trip. After analyzing the conditions and making some decisions, Brian saw an opening in the weather and decided to continue on with their trip. As they traveled over mountains with little altitude, the bad weather began to quickly surround the small four-seater plane. The plane hit reversed airflow, which caused it to stall. Brian stared at the mountain straight ahead of them and realized the situation was deadly. He took a staggered breath to say to his wife and daughter, “I am sorry. I don’t think we will make it. I love you both.” The plane was rapidly falling and Brian pitched the nose down in an attempt to gain lift. He pulled on the control column with every fiber of his being.

In the next moment, the plane crashed through the canopy and branches but managed to hit belly side on the side of the mountain. Brian woke up moments later in a fuzzy haze, feeling something pouring down his cheek. He then heard his daughter, Heather, scream from the passenger side of the mangled plane. Heather was holding her mother by the back of her shirt as she was barely being cradled by her seatbelt; Jayann’s body looked like that of a rag doll hanging out of the plane where the passenger door once was.

“I’ve killed my wife,” Brian thought to himself as he shifted his body.

“Dad, help! She’s falling!” Heather said, her arms shaking. Brian helped his daughter pull Jayann inside the plane. She was gasping for air and her eyes were rolled back in her head; Brian knew his wife had a head injury and he began to reposition her head and clear her airway. A few seconds turned into a minute and Brian prayed his wife would come back to him.

Finally, Jayann took a deep gasp. “I’m still with you,” she said. She was in shock, but she was alive. One miracle down, and Brian did not yet realize the miracles that would still follow.

Night was upon them and the troublesome conditions grew. The temperature in the canyon dropped and the idea of sleep was impossible as Brian and Jayann both had head injuries.

Brian knew he needed to call for help, but with cellphone signal being spotty at best even on the roads and other areas of Oregon, he was not surprised when he could not send out a mayday signal with his portable radio and other devices. 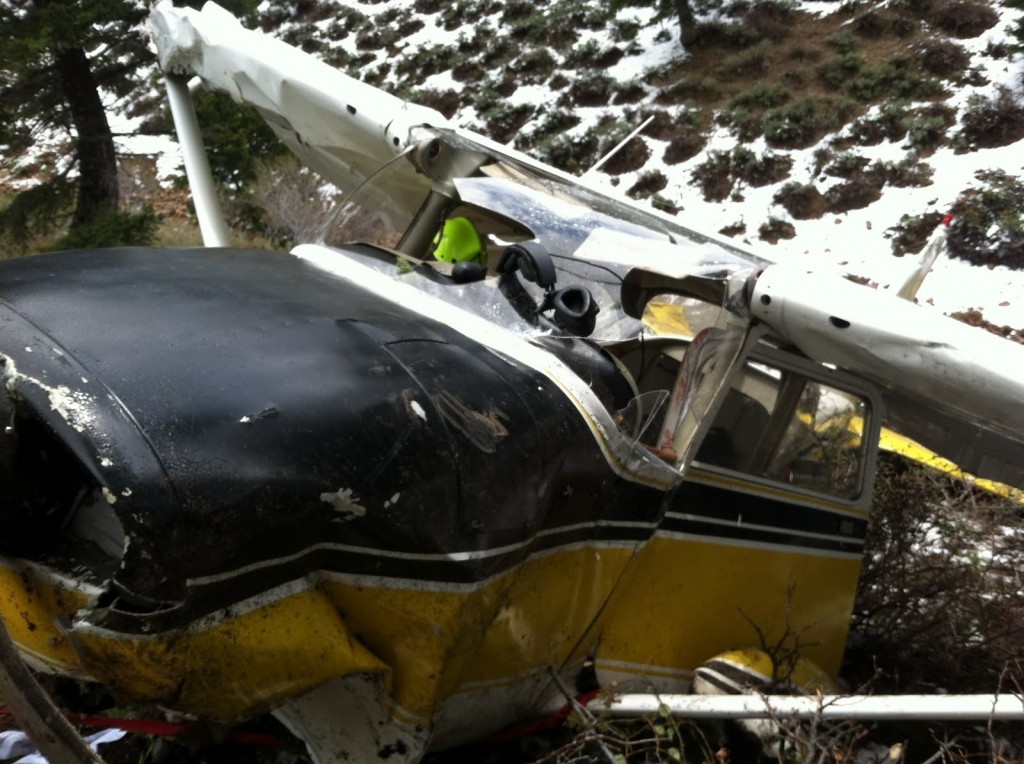 Heather continued to watch over her mom and began to gather some snacks they had on the plane. Brian knew he needed to start a fire to ward off possible hypothermia; he managed to fill a plastic cup with engine fuel and poured it over some branches. The fire quickly burned out and the three just looked at each other, fear apparent in their eyes. It began to snow soon after.

There was one blanket amongst them, the one Heather grabbed before they took off what felt like so long ago. Brian located the passenger door and did his best to put it back in place so they could huddle in the plane for the night; Heather gave the blanket to her parents. Jayann prayed and they all did their best to keep each other awake and warm. They shivered, they prayed, they worried, they did what they could to not fall asleep, dreaming of how they could escape this horrible situation alive.

The next miracle of the night came in the form of a beloved Abba song. “You are the dancing queen…. Young and sweet…”

It was Jayann’s phone, ringing with the song she gave her eldest daughter to ensure her call was always recognized.
Heather fumbled to find the phone in the wreckage but did not get to it before the call was sent to voicemail. Brian, in his fuzzy state of mind, exclaimed, “Call her back and tell her to call 911!”

Heather, thinking better of that request, scrabbled quickly to call 911 herself. She was able to get off-and-on clarity to her calls with the dispatcher but Heather and her parents did not know how to explain where they had crashed. The dispatcher was eventually able to ping the cellphone and the search and rescue was underway. It was 12:31 in the morning.

A little while later, Brian heard the whirring of a helicopter overhead.

“This was such a warming moment,” Brian said. “I just kept thinking, oh my gosh, they’re getting closer.”

The search team was within a five mile radius but were operating in whiteout conditions. Finally, at 5:50 a.m., Brian went outside and launched one of the travel applications he had downloaded to his cellphone before this trip; this app was able to flash like a strobe light to get the attention of the search team. The helicopter radioed overhead and landed a mile away from Brian’s crash site, hiking to them in the snow and low visibility. When the pilot finally got to them, he took a long look at the mangled plane and the three survivors as if he were staring at a group of ghosts.

“I’ve been doing search and rescue for a long time, but I’ve never brought a live pilot out of the mountains,” the pilot said with misty eyes.

One by one, the family was hoisted into a National Guard helicopter that flew them to safety where they were met with the proper medical attention. 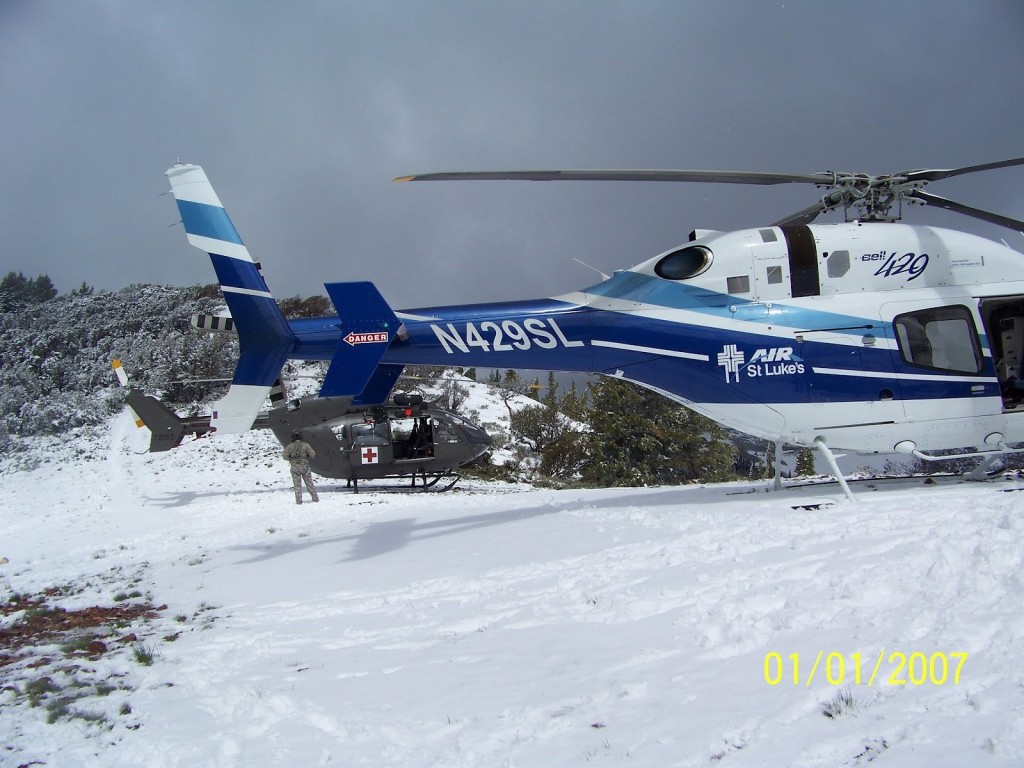 The family had indeed suffered. Hypothermia was among them; Brian had a deep gash in his left arm, a broken right arm, nose, and he lost part of his scalp; Jayann suffered a head injury and broken ribs; Heather was deeply bruised. None of them needed surgery. Everyone survived. Brian knew their survival would not have been possible without divine intervention. Whenever he talks about the ordeal, he cannot help but give thanks to God.

“I have always believed in God and prayed, but my life was changed after that day. I looked back on everything that happened and knew there was no way we should have survived if it weren’t for a lot of miracles.”

As Brian reflects on the event now two years later, his body is sore and scars still visible, but the worst scar is the emotional struggle with which he and his family are still dealing.

Part of the healing process came in the form of writing a book about the ordeal, which has also lead to many speaking engagements including the Today Show, Aircraft Owners and Pilot Association,  and the 700 Club.

Brian and Jayann have recently celebrated their 31st wedding anniversary. Brian is now completing a flight training that has added complex and high performance aircraft to his experience; which means the landing gear goes up and down and the pitch of the propeller can be controlled by the pilot to make the plane (engines with more than 200 horsepower) perform more efficiently.

Brian attributes a lot of that day to his brave daughter, Heather, because of her emotional support and strong will. “My wife and I wouldn’t be alive if it weren’t for her.” They needed each other to survive.

Three people boarded the 1966 Cesna 172 that fateful day, but Brian will be the first to tell you that when he reflects on the events of the crash, there was Someone else there watching over his family. 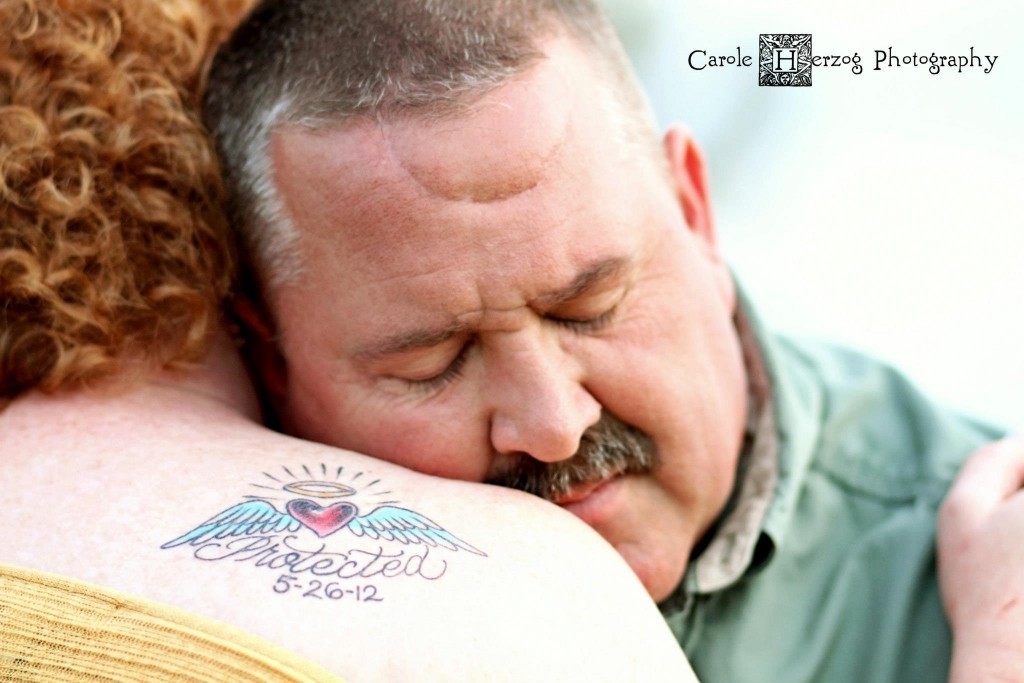 Brian and his wife with the tattoo she got after the incident.